Austin: Vote YAY on Prop A 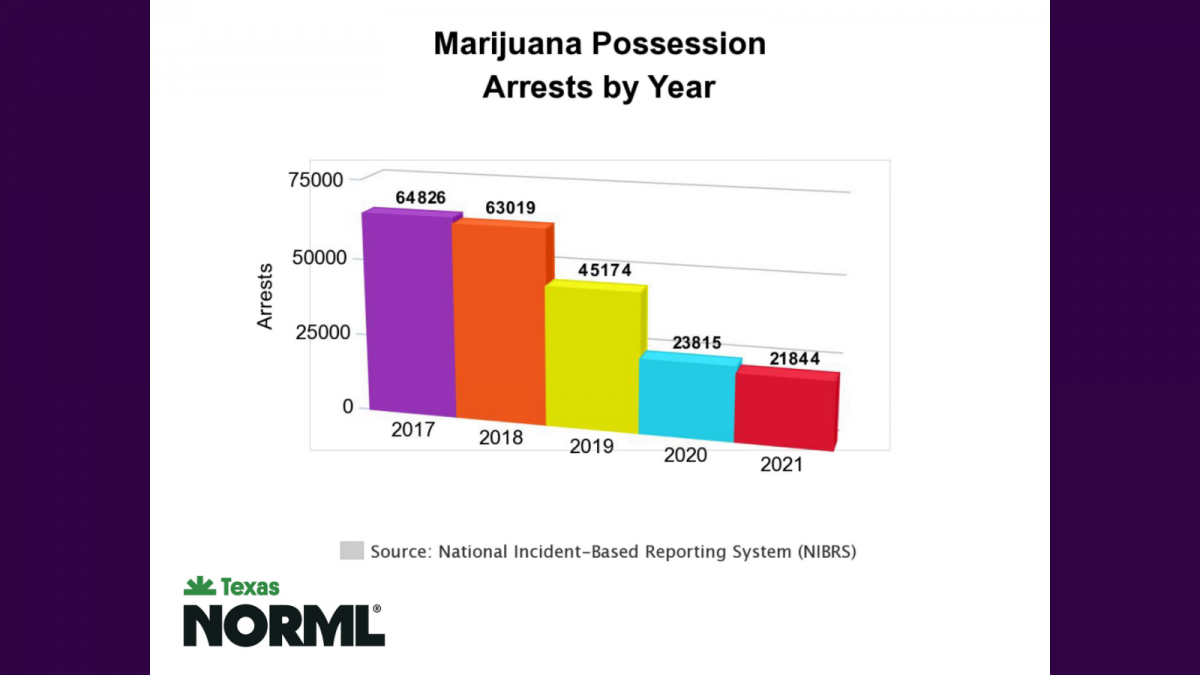 Texas NORML has assembled an overview of marijuana arrests between 2017-2021 using the FBI’s National Incident-Based Reporting System (NIBRS), which is used by law enforcement agencies in the United States for collecting and reporting data on crimes. In reviewing the data, we found some interesting and troubling facts which have been outlined in our report.

“There was a dip in arrests due to the legalization of hemp products before COVID, and the pandemic lowered overall arrest rates for cannabis possession even more. Troublingly, though, there was only a decline in the arrests of white Texans during that time; arrests of Hispanic and Black Texans actually increased over the same period. The House will continue to address these issues in the 2023 legislative session—not only to foster success for an industry, but to finally ensure truly equal justice in this arena,” states State Representative Joe Moody (D) HD-78.

“Our local communities are doing a phenomenal job providing their constituents local community safety by focusing on those who are a danger to our children, our property, and our personal safety, not those that we are mad at or exhibit behavior that just angers us. Now, it is time for the Texas Legislature to step up and provide the statutory reforms to cannabis possession to insure effective and efficient community safety that treats all Texans equal under the law,” says State Representative James White (R) HD-19.

“The ongoing prohibition of marijuana financially burdens taxpayers, encroaches upon civil liberties, engenders disrespect for the law, impedes legitimate scientific research into the plant’s medicinal properties, and disproportionately impacts communities of color. Decriminalizing low-level marijuana offenses allows police and the courts to re-prioritize their resources toward addressing more serious crimes. Minor marijuana possession offenders, many of them young people, should not be saddled with a criminal record and the lifelong penalties and stigma associated with it,” says Jax James, Executive Director of Texas NORML.

Methodology:
Texas NORML has reached out to the Department of Public Safety (DPS) NIBRS team to verify these numbers. For total arrests by race, White is derived by subtracting Hispanic from White totals, which produces a rough estimate rather than fully accurate result. Arrest rate changes between 2017-2021 are based on the overall share of arrests by each race comparing rates in 2017 to 2021. For example, the arrest share of Blacks in 2017 was 28.4% versus 34.3% in 2021. Data accuracy is dependent on local agency reporting methods and may be updated at any time by each agency.